Into the Atlas Mountains 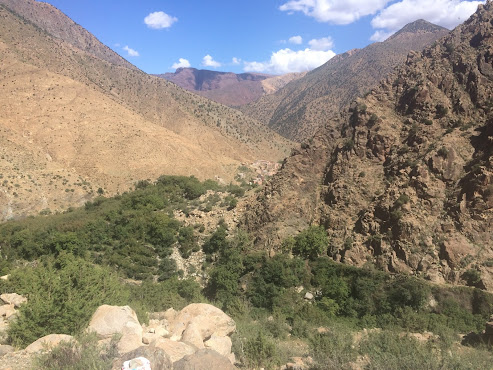 “If you climb to that ridge and keep walking south you will reach the Sahara Desert, but it will take you a week,” says the guide.
Tempting as the thought is, I decide that a half bottle of tepid water and the apple in my rucksack won’t get me through such a trek and it would need a bit more planning. The guide instead leads the way up through a small cluster of Berber market stalls selling carpets, tagine dishes and the inevitable collection of beads and necklaces that seem to populate markets the world over. The temperature is in the mid-20s, but that is cool relief from the searing average of 32C in nearby Marrakech. Coming out of the city, the Atlas Mountains rise on the horizon as you approach and the road deteriorates as the car begins its ascent. It is a lush green landscape of willow, cherry and pine trees, with cactus plants scattered among them. From the village of
Sti Fadma, set at around 1,500 metres above sea level, the trek is a brisk and sharp hike along well-trodden paths alongside a churning river.
This ancient north African mountain range dates to around 170 million years ago and runs from Morocco’s Atlantic coast through neighbouring Algeria and into Tunisia. The rocks range from dusty grey, through to dark red and blinding white. But it is a fertile landscape and as well as humans is home to an abundance of species. Wolves, boar and wild goats roam among its gorges and forests, while it is not unusual to see Barbary Macaque apes.
On my way through the Berber market I had passed a craftsman carving a bowl from the trunk of a walnut tree, and the looping swirls that predominate Islamic arts and crafts seemed to echo the patterns that you can see in early Irish carvings, as if both had a common source. The path steepens as it breaks out of the woodland into open mountainside and the group of six who set out from Sti Fadma dwindles as people drop out and content themselves with sitting on a rock and listening to the mountain silence.
“And then there were three,” mutters an American to me and a Japanese woman as the last of the stragglers decides to take a rest and wait for our return.
The guide hops from rock to rock as his diminished party grumble over the fast pace he is setting – scree and pebbles dislodging beneath our feet to tumble over the sheer drop beside the path. From far below comes the evocative call to prayer from the mosque in the village from which we started walking. At last the path levels out as it approaches a small plateau overlooking a gorge into which five waterfalls, one above the other, plunge, the roar of water amplified by the enclosed space. Thankfully a small stall selling freshly squeezed orange juice has been set up there, reviving and cooling after the brisk hour-long climb. Overhead a peregrine falcon meanders in circles before taking off southwards towards the Sahara.
Atlas Mountains Irish travel writer Morocco Sahara Desert Travel Writing

THE churning water rears and foams and then drops away as if a plug has suddenly been pulled from the rocky confines in which it had become trapped. The rectangular hollow on a fossil-covered limestone outcrop looks as if has been hewn by hand to create a swimming pool, but it is a natural feature on the Atlantic shoreline of Inis Mór, the largest of the Aran Islands. Poll na bPéist is translated on the signs that guide visitors to it as 'The Wormhole'; however, on some maps it is named 'The Serpent's Lair'. 'Poll' is an Irish word for hole which can also be used to describe an animal's lair while 'péist' can mean worm, serpent or even monster, so both translations are valid. While the idea of a serpent's or monster's lair is more evocative, the word wormhole also has intriguing connotations – describing the underground channels through which the currents surge and retreat from the open sea into this deep rocky pool from which, if you jum
Read more